If Japan is well known for sports like sumo or many martial arts like karate or judo, many people do not know Japanese love for baseball. However, this american sport is so much practices in the archipelago that it is the only foreign discipline to have its own kanjis (野球 – Yakyuu).

Appeared at the end of the 19th century thanks to the influence of the United States, baseball quickly became a university sport and tournaments between Japanese and American players were organized. Following a tournament held in Yokohama in which the Japanese emerged largely victorious (29-4), the popularity of this discipline has continued to grow.

The main differences with the MLB (Major League of Baseball in the United States) lie in strike zone, ball and pitch that are smaller. For the rest, the rules are much the same.

Before this trip, I knew absolutely nothing about the sport. When François joined me in Osaka in May, he offered to go see a game of hanshin Tigers, the team in the city, at Koshien Stadium, Japan’s oldest professional stadium. Thanks to him I was able to discover the atmosphere of the stadium, the enthusiasm of the fans and the rules he explained to me during the match.

Baseball is played on two teams and takes place in 9 rounds. Each round is divided into two : each team plays on attack and defense. The attacking team is the batter alone, the defenders are the pitcher, the catcher and the other defenders, numbering 7, on the field at specific locations.

To score a point, a batter must go around the field through the 3 bases and the home plate by turning counterclockwise. He must therefore hit the ball so that he has time to reach at least the first base. If he succeeds, he will then have to, when a new batter hits, reach a new base to hope to score a point at the end. If the defenders manage to return the ball to the base that the batter was aiming for before he reached it, he is then eliminated.

In short, baseball is a sport of talent (precision of pitcher and batter, running speed, ability to quickly react since some balls reach more than 130km/h) strategy (Which throw should the pitcher do ? Where to send the ball to have enough time to run ? Which batsman to place when you have full bases and you can score a lot of points in one shot ? How best to manage players’ energy ?). No wonder that japanese people love so much such a technical discipline…

To see more clearly in these stories of bases and diamonds, I propose a diagram that presents the topology of a baseball field (the dimensions are those of an american field).

Besides the sport itself, which I find rather interesting to watch, what marked me in Japan is its ubiquity. As soon as you find a corner of grass, you can see young people playing baseball. Either simple throws, or downright games, improvised or not, in the heart of the city. This is especially true in Osaka where I spent many saturday afternoons walking along the various rivers of the city. 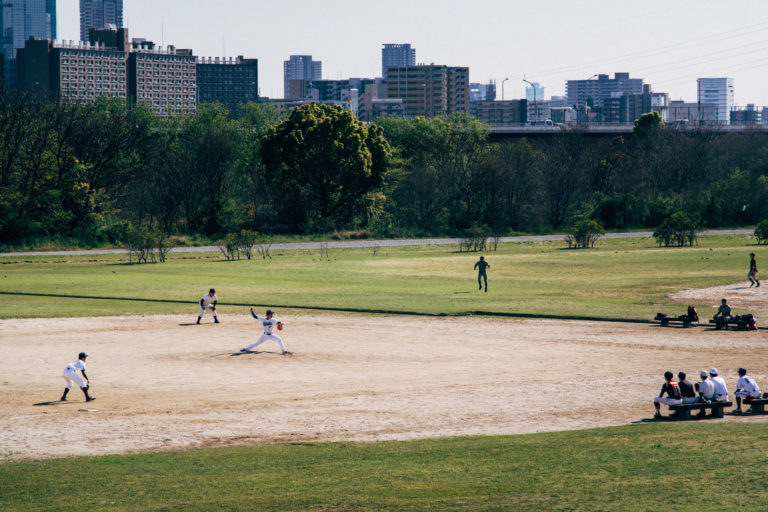 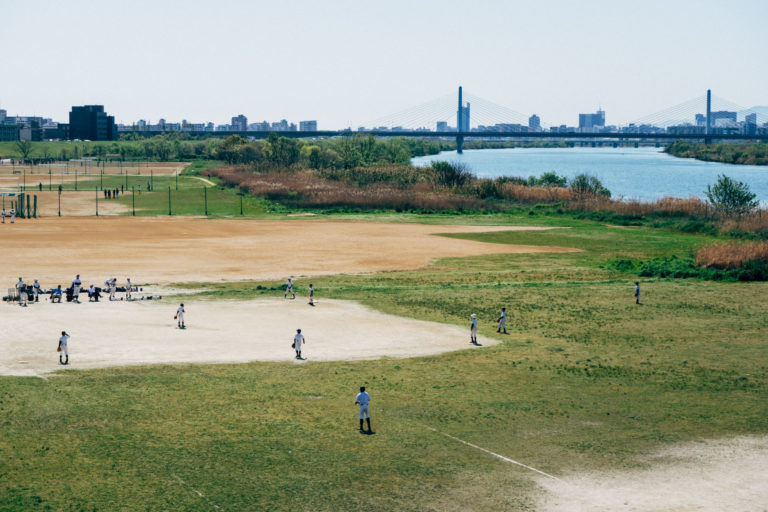 There are students, schoolchildren, retired people, families, playing everywhere. And some are far from bad ! An interesting fact is that the Japanese Student Baseball League organizes an annual national tournament with the final taking place in Koshien stadium. Like if the student soccer competition would end in the Stade de France. 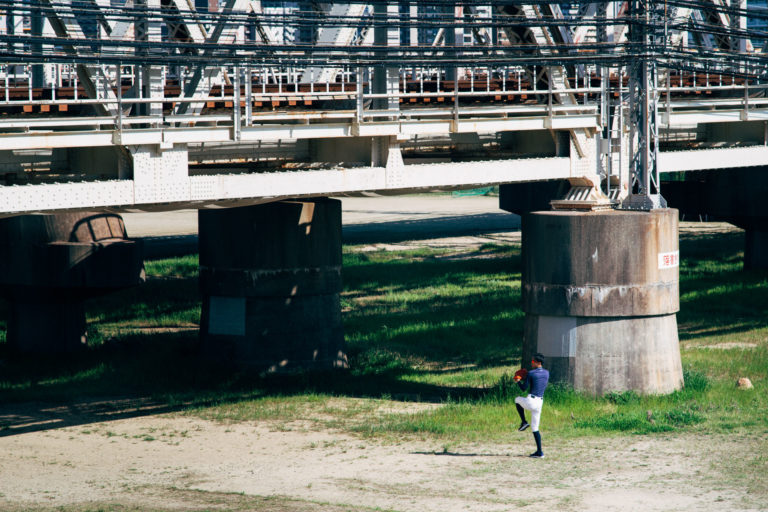 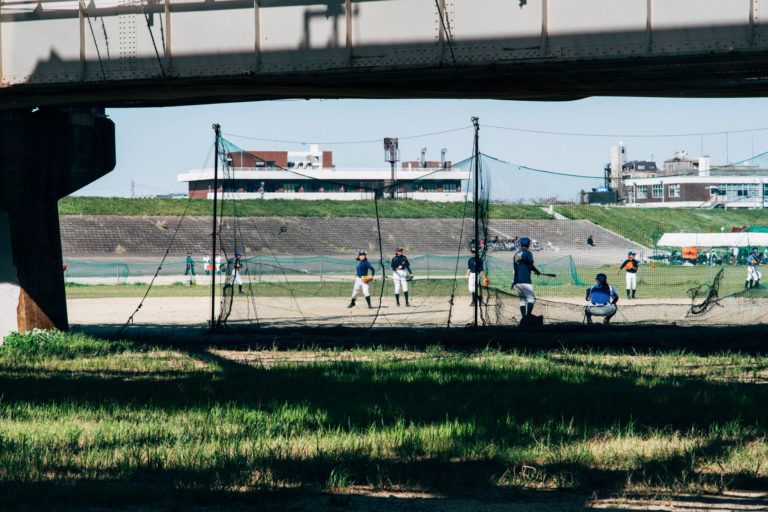 Whether they are professionals or just enthusiasts, they always manage to play in the best possible conditions. Even in public parks, there is always enough stuff to draw the lines properly, which are precisely measured. All have good equipment to play (shoes, bats, balls of official size, protections …) and they spray water on the ground to avoid dust, like the pros! 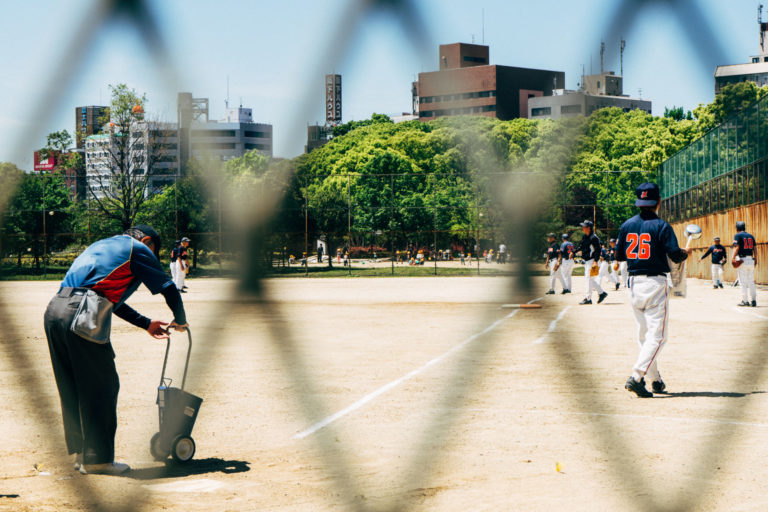 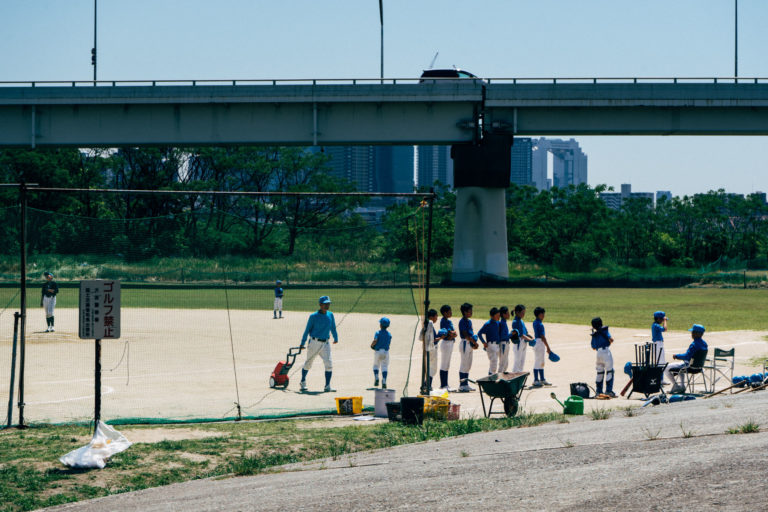 I offer you a little photographic and audio feedback on the match I attended at the Koshien Stadium, between the Hanshin Tigers of Osaka and the Chunichi Dragons of Nagoya. I hope you can feel the atmosphere in the stadium : everyone sings (and knows the song dedicated to each player!), claps their hands or hits mini plastic bats to the rhythm of the brass band, and drops a multitude of balloons in the colors of the team when the victory comes. 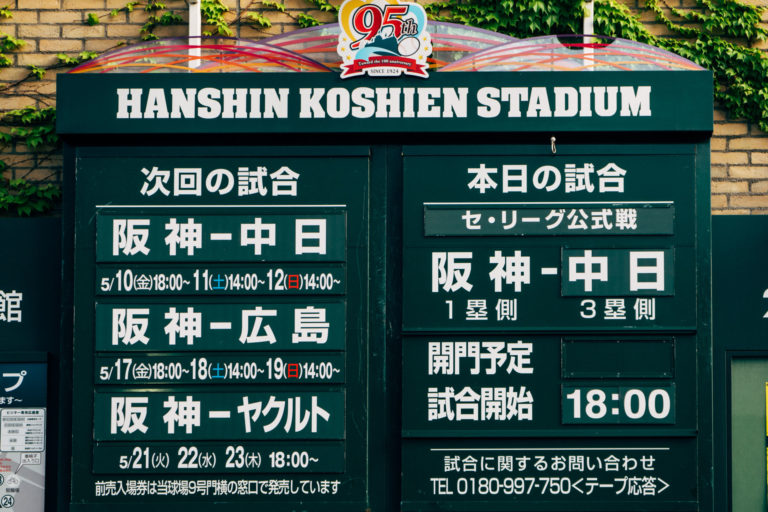 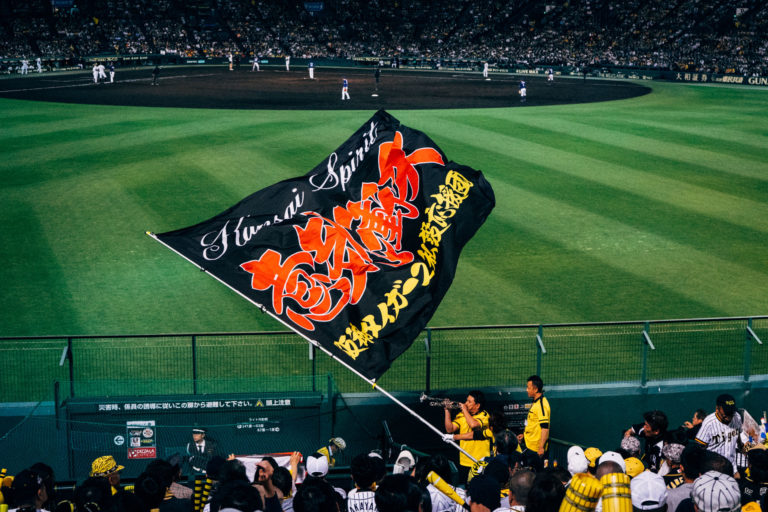 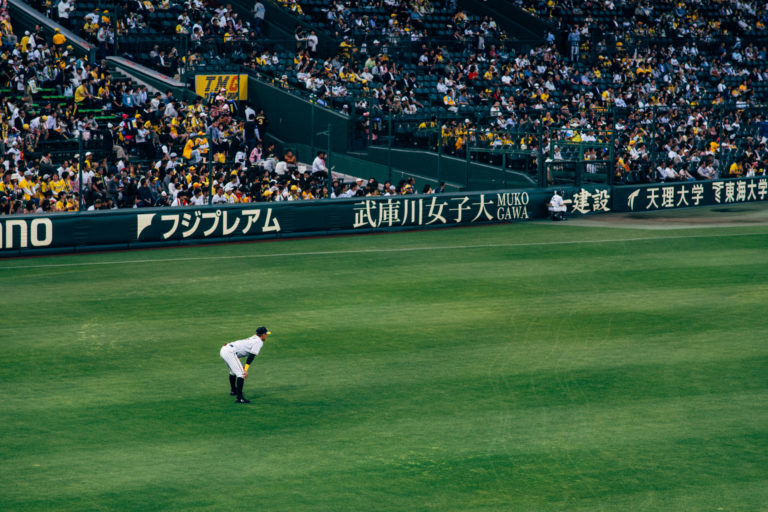 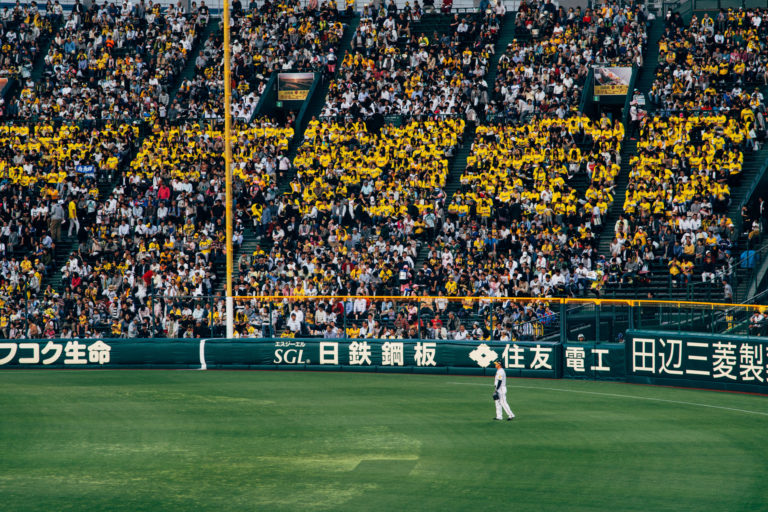 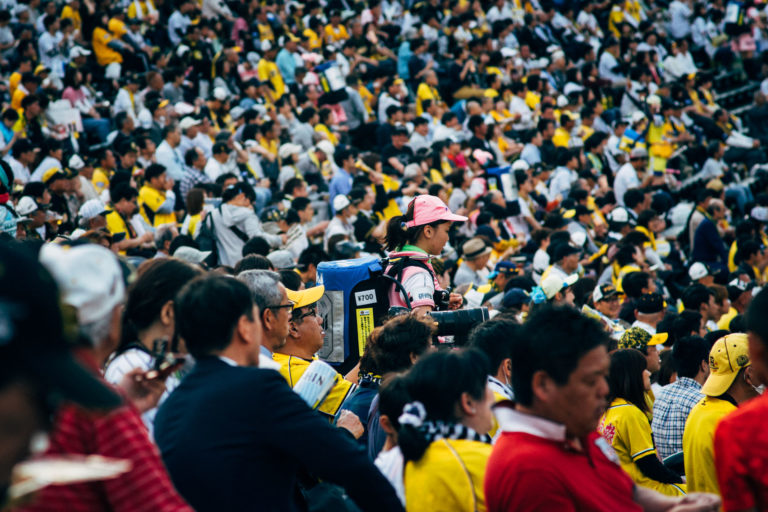 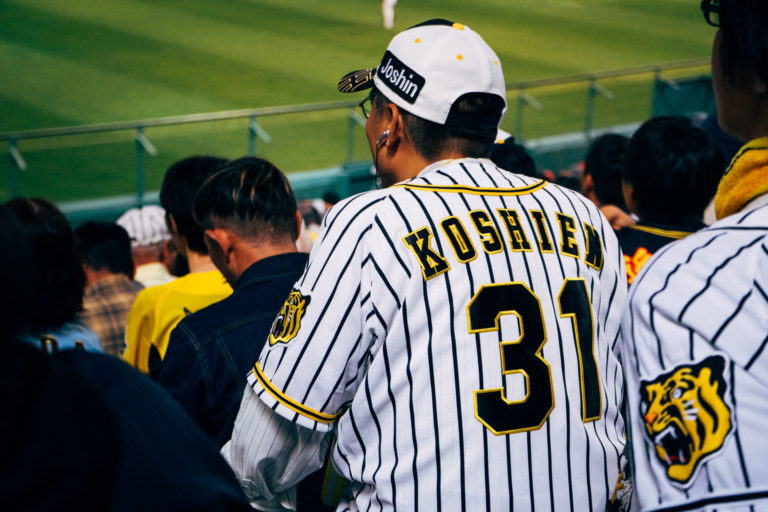 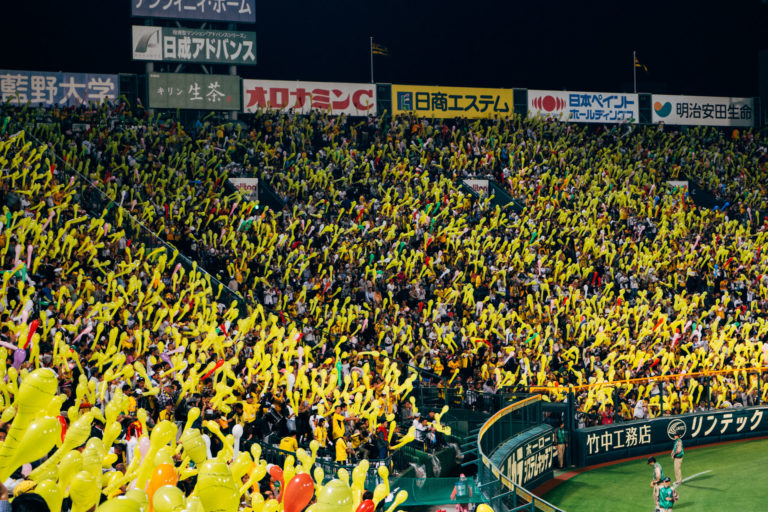 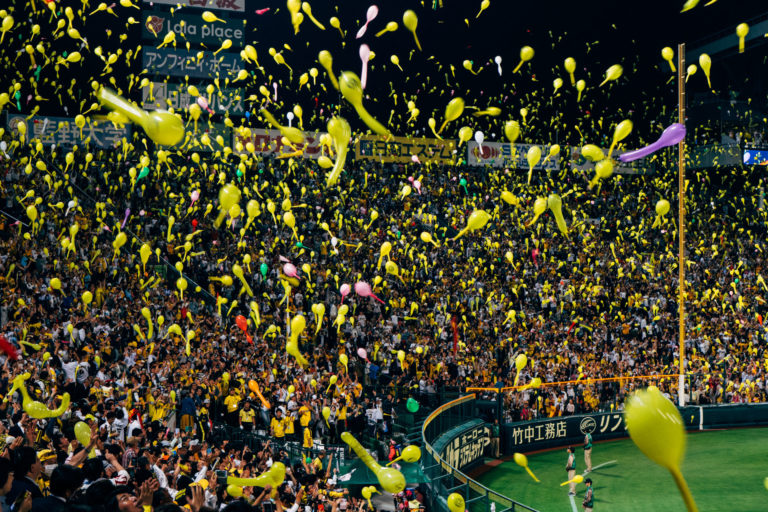 That night, the Tigers won 7 points to 3 ! Thanks again to François for introducing me to baseball, as I never had a great interest in collective sports…