As I speak about rāmen since several reports, it is now time to reveal what is this delicious and so typical japanese dish.

This noodle soup is not directly native to the land of the rising sun. Indeed, if we look a little closer to the character set used to write ラーメン, we see that the katakana set is used. In other words, the third type of characters, the one that allows to transcribe foreign names. Rāmen (pronounced laamen) comes from a kind of Chinese wheat noodles “lamian”. Its appearance in Japan dates back to the early 20th century, in Chinese restaurants specialized in Cantonese and Shanghai cuisine. The first specialized store, located in Yokohama where we can also find the Museum of rāmen, dates from 1910.

The popularization of this dish happens only later : at the end of World War II, Japan faces an unprecedented shortage of rice and must therefore turn to wheat, a cereal imported from the United States of America that then occupy the territory. At this time, the sellers of ramen are mostly affiliated with the Yakuzas, members of the Japanese mafia, and the American repression is severe. In the 50’s, the controls on the trade in wheat flour ended and the Ramen became a symbol of Japanese street food.

In all its forms, from the most traditional to the most fanciest, the famous soup has even become for some kind of quest of the Grail : we no longer count the number of blogs, specialized sites, YouTube channels dedicated to the search for advice or even the ranking of the best shops in the world. There are today some 24 000 restaurants of ramen across the country (almost 5 000 for the Tokyo !). Here we don’t mess with noodles.

If rice is one of the most precious foods in Japan (the only one for which the country is self-sufficient in case of war), the Ramen is a real institution and you will have to taste several bowls to get an idea of the type that suits you best.

More than just a soup

To describe the rāmen, the term “noodle soup” is the most frequently used. To be a little more precise, here are the different elements that have to compose this dish :

Composed of wheat flour, alkaline water and a little salt, the noodles are particularly elastic and supple. If you are testing several restaurants, you will find that they can differ greatly from one to an other. And if you are in a shop that respects the customer and who is paying great attention to his kitchen, you will find that the thickness and texture changes depending on the type of ramen you will be ordering.

The base of the soup is a generally clear and fluid broth. It can be a simple chicken broth as being made up of many ingredients chosen with the highest care. We find fish-based broodstocks (Katsuo, sardine), chicken, vegetables, pork… The only one that really differs from the others is the “tonkotsu” (豚骨 – pig bone), which is a reduction of an infusion of pig bones and gelatin, speciality of Kyushu and Osaka.

The broth is the base, the seasoning is the direction you make it take. With the same broth, we can basically achieve 4 types of ramen even if some seasonings are better suited with a particular type of broth.

Yes, the Ramen is a rather greasy dish. If you are planning a culinary journey spending most of your time eating these delicious noodle bowls, you will weigh a little more on the scale when you return. Oil is added to the seasoning to fix the aromas that could be lost in the broth water. Garlic is often added to this oil, but it is not an obligation. It can be of vegetable origin (sesame, sunflower, olive) or animal (chicken oil for example).

It is not uncommon to find a spicy version in parallel of the basic version. Be careful so if you read the Kanji 辛 (karai) which means spicy!

In other words, everything you add on top of it. If the traditional ingredients are numerous, all the fantasies are allowed, as long as everything fits perfectly.

Among the highlights are the ajitsuke-tamago (味付け卵), an egg marinated for at least 24 hours in a solution of soy sauce, mirin, sake and sugar, or the unfailing chāshū (チャーシュー), braised pork whose original recipe comes from China. Nori leaves (のり), crispy and salty dried seaweed, chopped onion, various fresh herbs, sometimes mushrooms or bamboo shoots, are also regularly found.

In Hokkaidō you can find its bowl adorned with corn and a nut of butter, on Shikoku they chikuwa (竹輪), a kind of fish cake whose texture reminds the squid. Each area, and more broadly each city, has its speciality. You can therefore quite organise a culinary journey considering only the ramen (given the amount of different dishes, it would be a little sad, but it is possible). 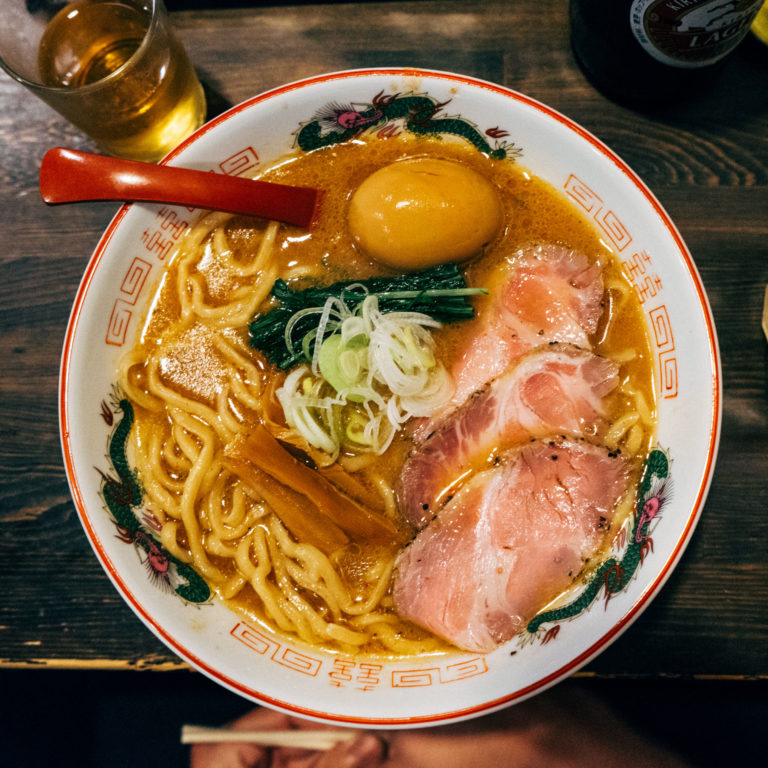 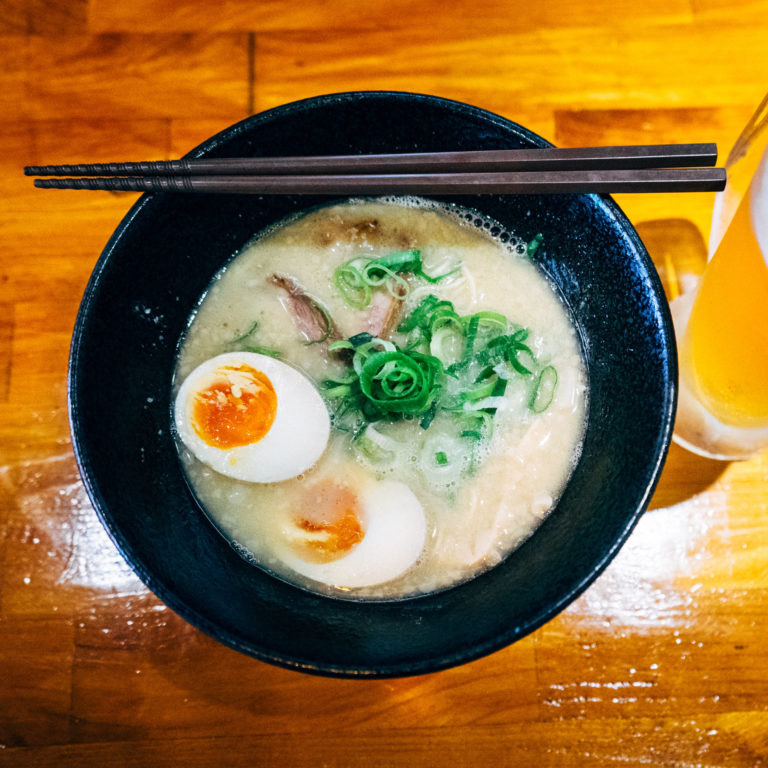 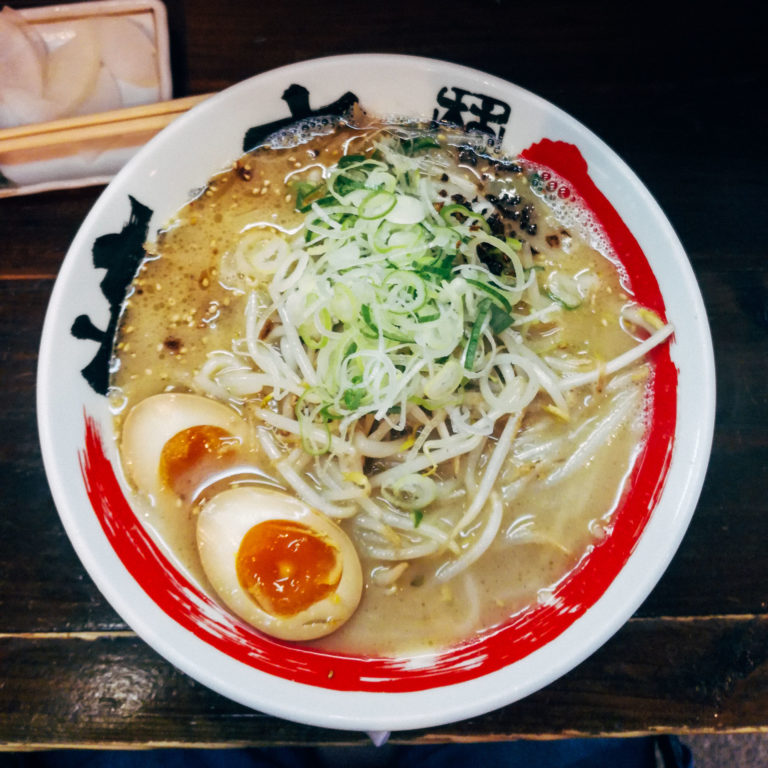 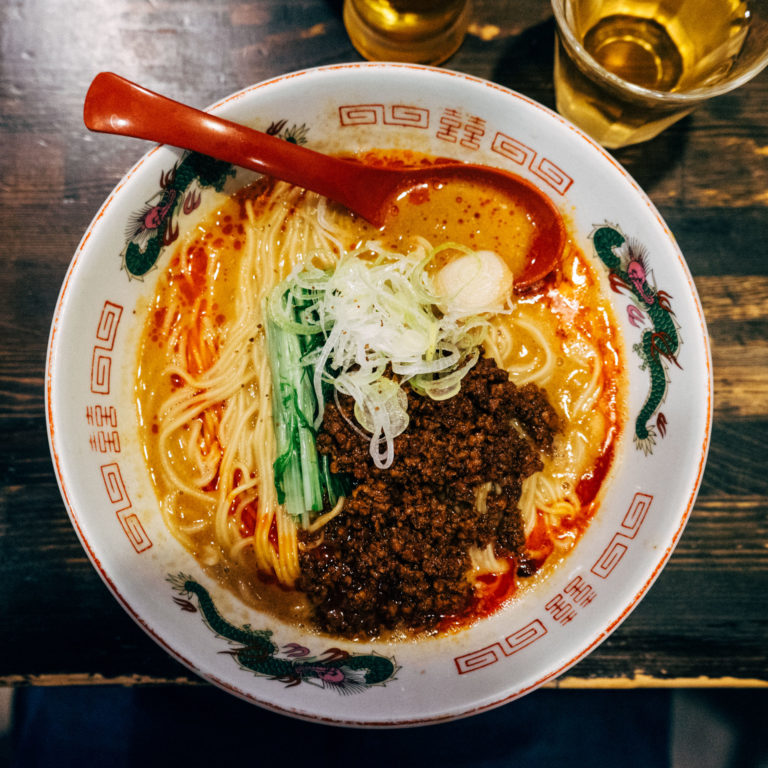 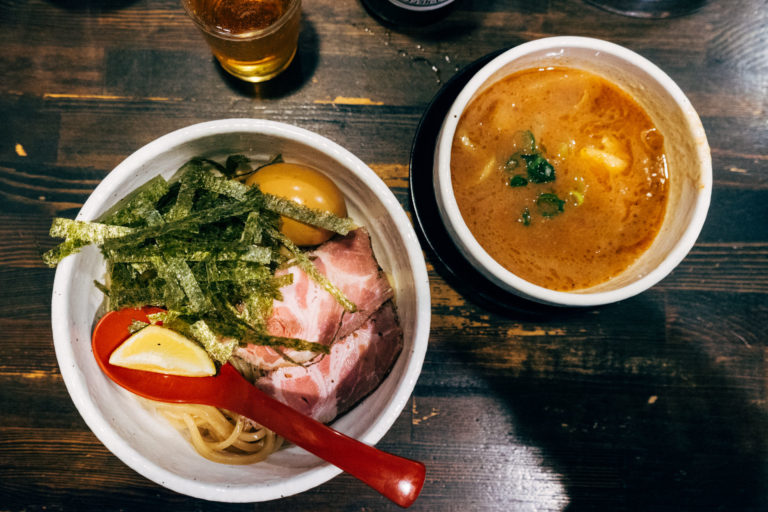 Where to find a good ramen?

To make it simple : anywhere in town. As explained above, the Ramen is a national symbol of street food, so it is found at many street’s corners, but also in subway or train stations. However, out of the tens of thousands of stalls, it is obvious that some are to be recommended among the jungle of counters.

I would only recommend the old shops in front of the brand new establishments. The hygiene might seem to be approximative and the staff will certainly not speak english, but if the restaurant is still standing, it must logically serve good soups. The best ramen I could taste were in small sized restaurants, discreet, with never empty counter (which explains that it can sometimes be a little sticky).

Yes but how to choose when in Osaka, in the Namba neighborhood to name just him, we can find more than 30 restaurants on a street less than 100m long ? The best way is to ask for advice in the street. As I said in a previous article, a simple sentence to an elderly person in the neighborhood can allow you to stumble upon the rare gem.

Try to remember this:

If it is really close, they will sometimes take you to the door of the restaurant. Otherwise, you just have to try to understand the indications thrown at full speed by a Japanese too happy to stumble upon a stranger speaking his language.

You can also of course turn to the countless specialized blogs that we find everywhere on the Web. Here are a few: 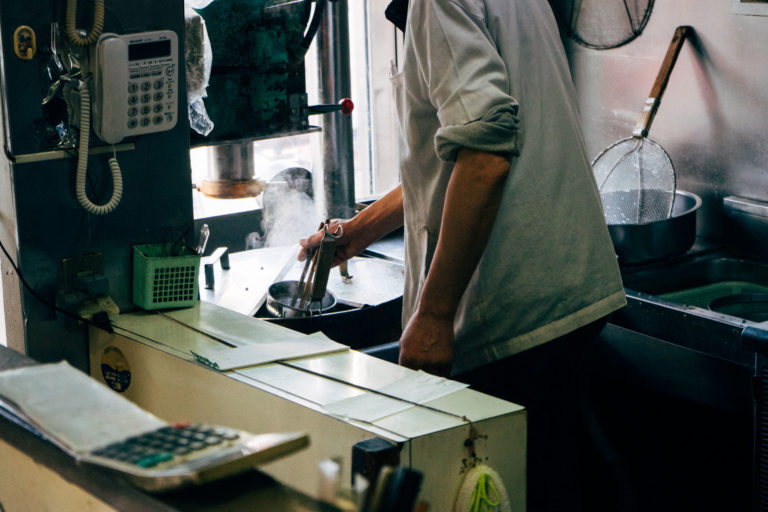 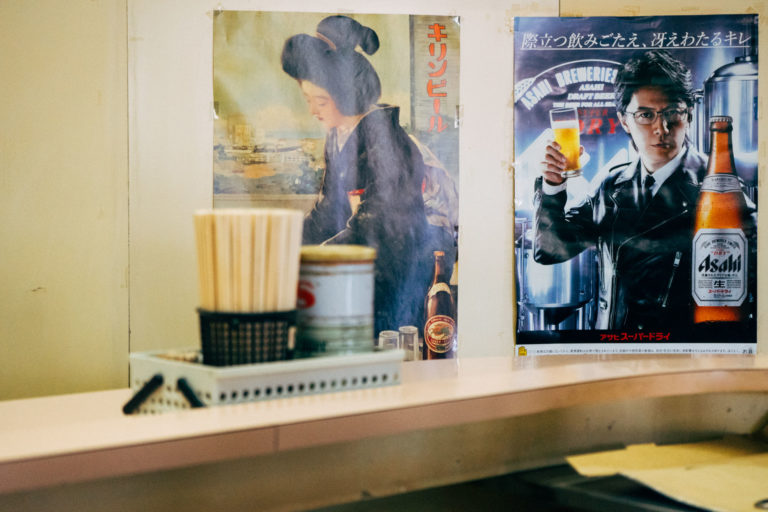 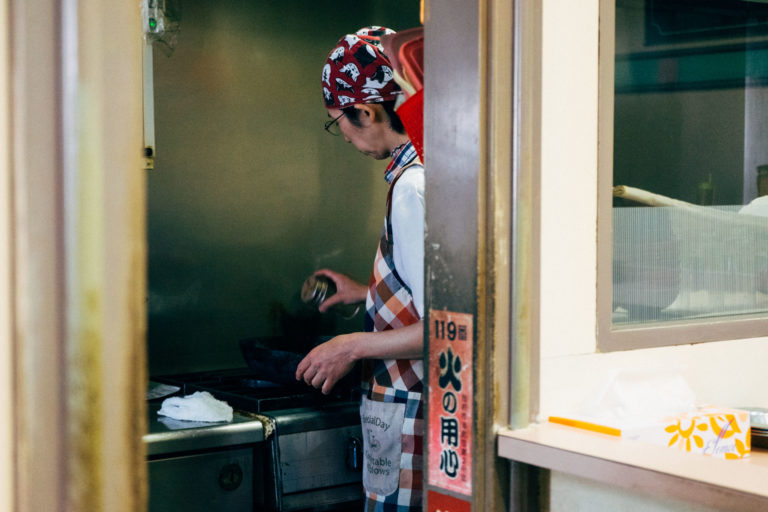 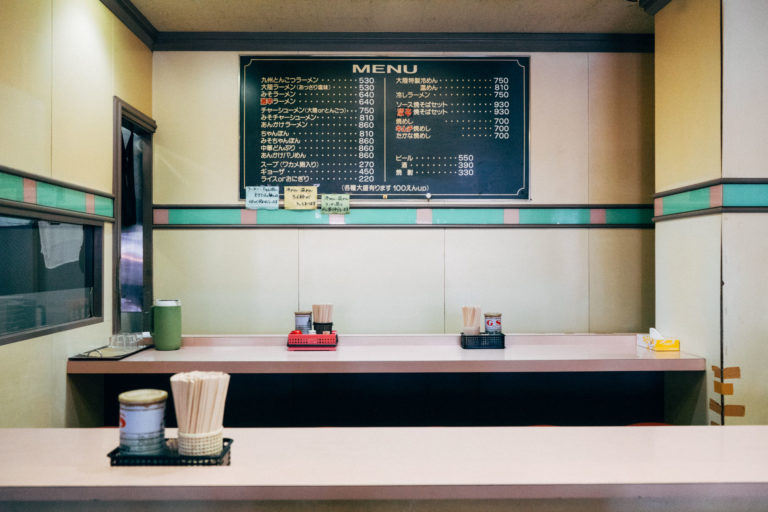 How to taste the Ramen?

That’s it, you’re finally sitting in the restaurant of your choice. Most of the time, you will be offered a menu in English. If this is not the case, you can ask the Chief’s recommendation:

If there is no rule as harsh as in a sushi restaurant or in a traditional tea house, one can however note some recommendations to better appreciate its bowl and show the cook that we love his art.

First of all, we are talking about street food, fast food. If you will often have about twenty minutes to wait before you can enter and sit, once served, it is pretty badly seen to drag the tasting lengthwise. And because of this, the number of seats is usually restricted. It is good to eat its bowl and then allow other guests to also enjoy the luck you have had. Another significant reason is that the noodles continue to cook in the broth and eventually lose their texture. Between 15 and 20 minutes is the time you will take to eat.

In France, when one particularly appreciates a dish, one eats it rather in silence. Here is the opposite ! One eats noodles making slurping noises, sign that it’s so good that you can’t wait for the temperature to drop down. No worries however : making noise is not an obligation. Don’t be surprised if on the other hand your neighbor lets go to loud “slurps”.

There is no real rule for the order to eat the different ingredients of the bowl, but rather simple recommendations : to better appreciate the whole dish you can start by tasting the broth that represents the general impression and the binder, then taste a little of each thing avoiding to swallow the entire toppings in the first place to keep a little for the end.

Drinking the whole broth is absolutely not obligatory. It contains a lot of oil and fat and if by finishing your bowl the chef will be honored, most Japanese people only drink a little of the soup to not die at the end of the meal. Another advantage not to finish the broth is that in some restaurant you can ask for a refill of noodles (or “kaédama” – 替え玉) for 200 to 300 yen!

If you are really hungry, most restaurants offer sets where your ramen will be accompanied by some gyoza (japanese raviolis), a bowl of rice or even fried chicken (karaage – 唐揚げ). But most of the time a bowl of noodles is already enough ! 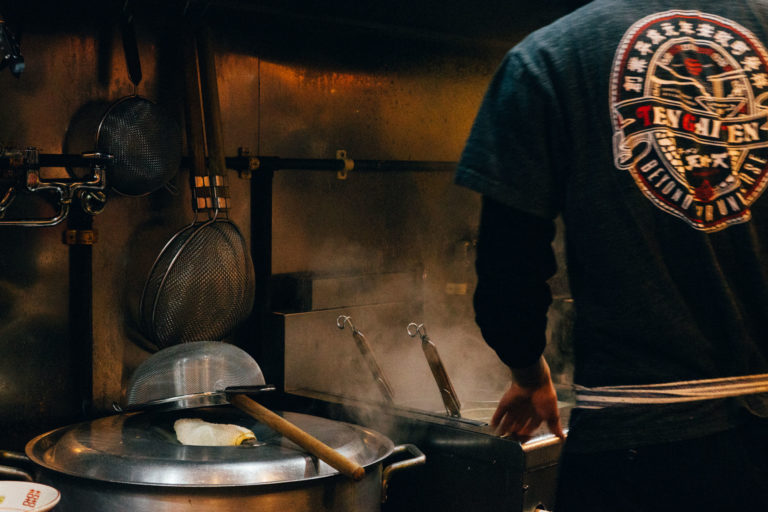 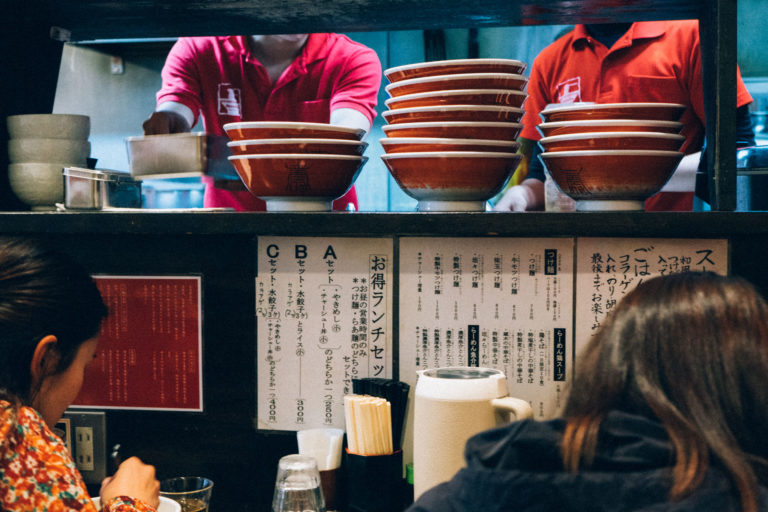 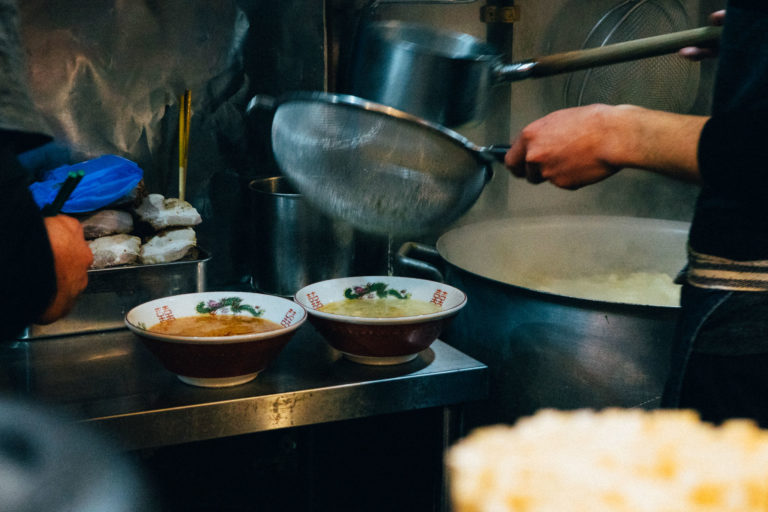 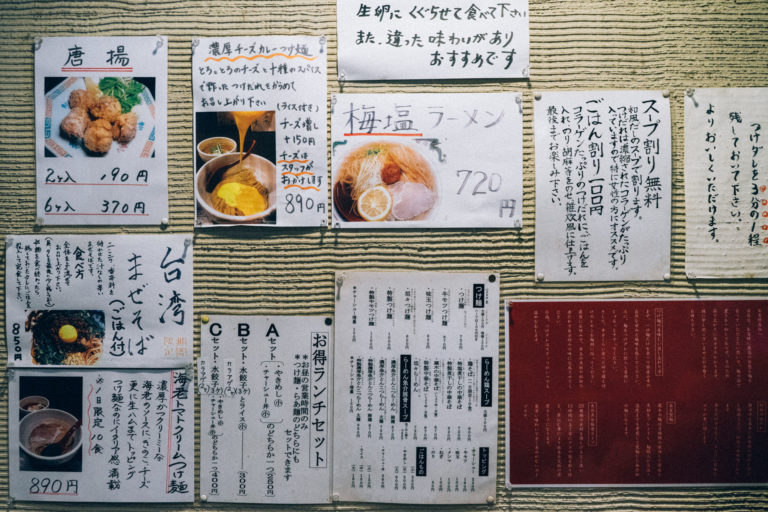 As very often in Japan, competitions exist to elect the best ramen of the city, the prefecture, the island, the country, the year… There are a lot of festivals organized over several days about ramen and this is a very good opportunity to find what type is your favorite.

During my stay in Kagoshima I was staying right next to a rāmen-fest where about 15 cooks were preparing their speciality for gourmets in search of taste ecstasy. The price of a bowl amounted to 700 yen which is slightly below what is found in restaurant (rather around 800-900Y depending on toppings and type of soup). 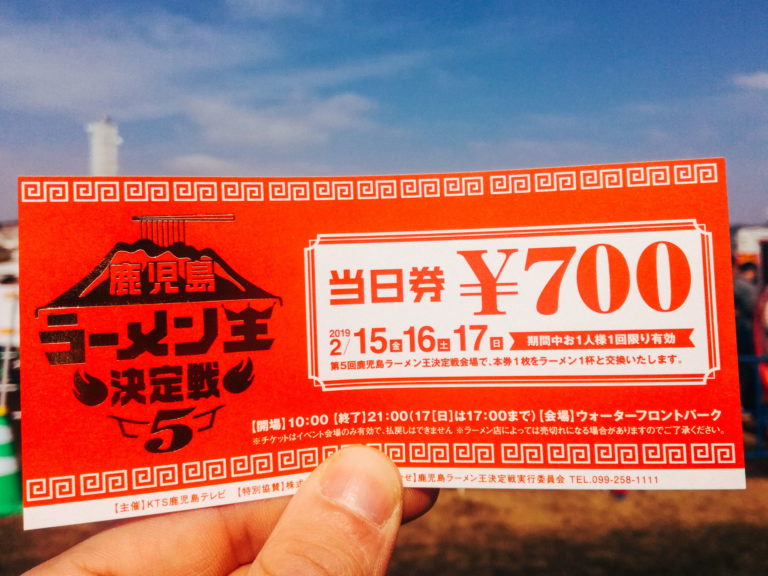 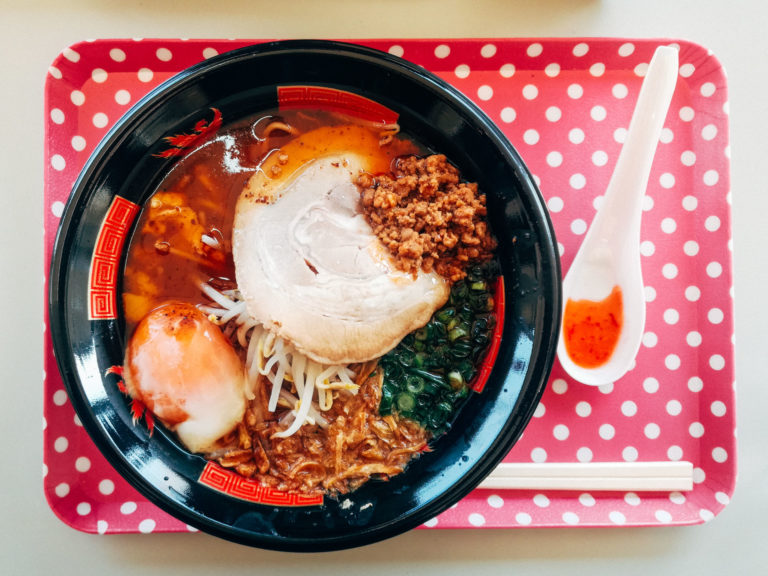 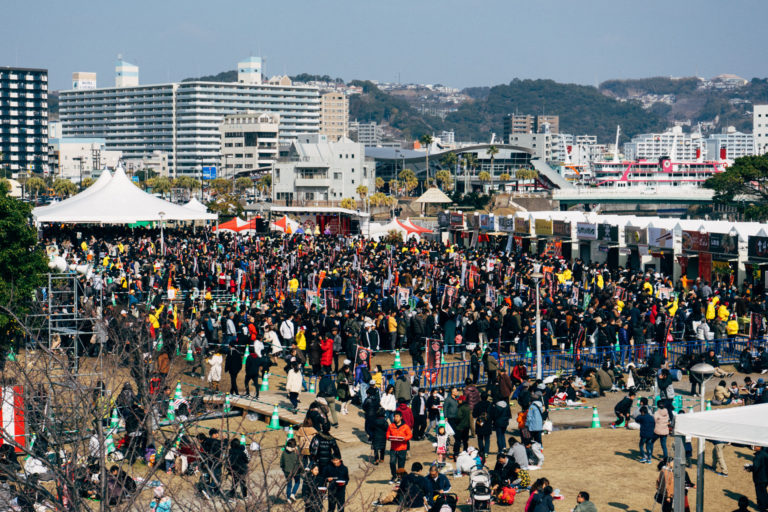 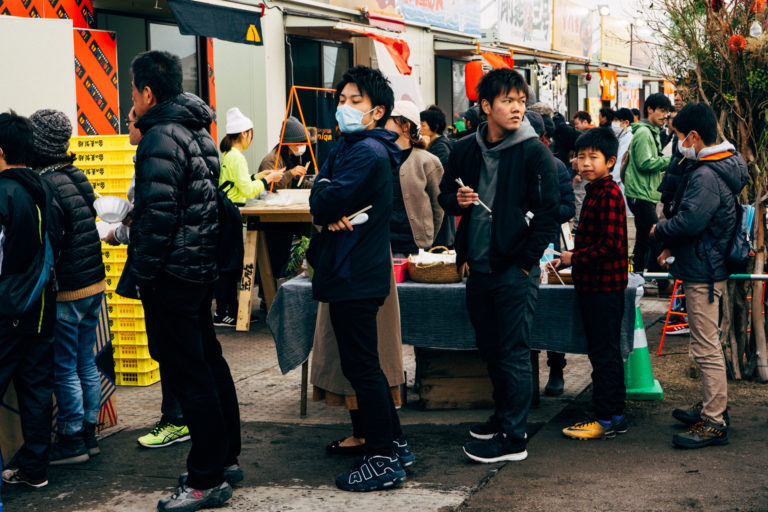 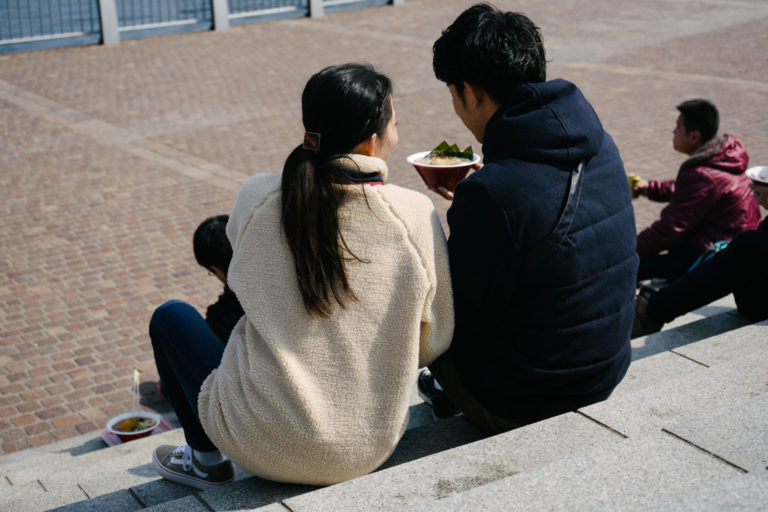 Like all food-related events in Japan, the crowds are dense and organized into long queues. However, the wait for the counters was only half an hour, while it was necessary to wait about ten minutes to a quarter of an hour to be served a bowl.

The atmosphere is friendly and the families and groups of friends find themselves in a good mood to taste as many bowls as possible sitting in the park reserved for the occasion, or under tents mounted for the Festival. 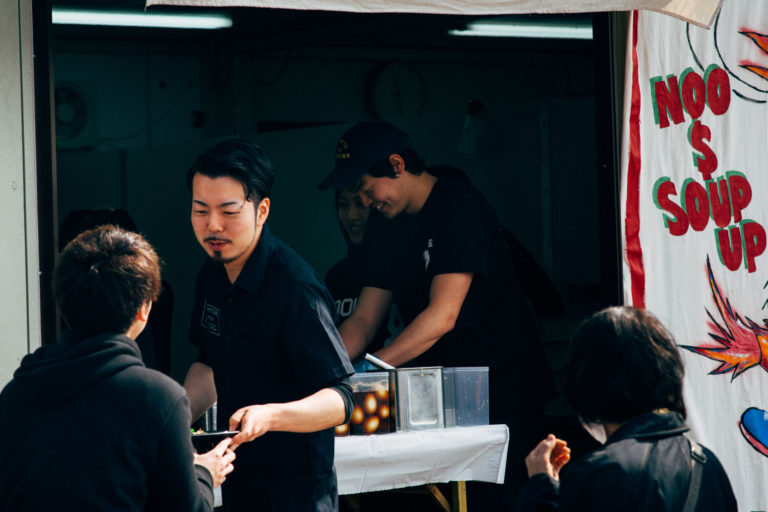 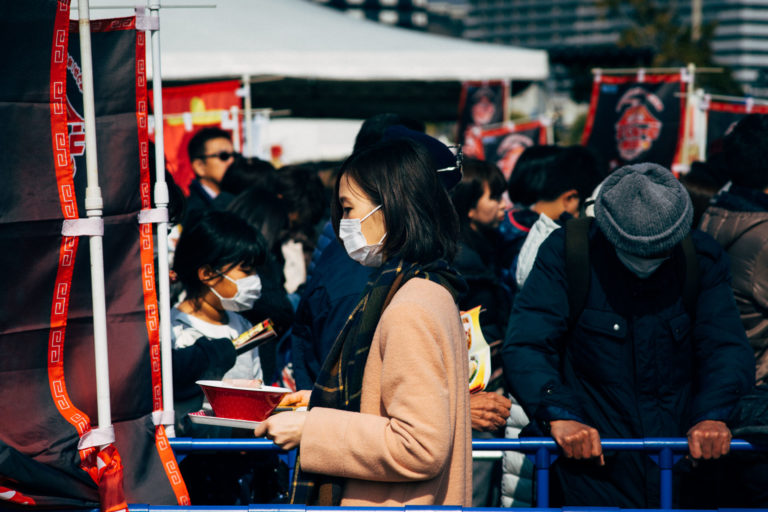 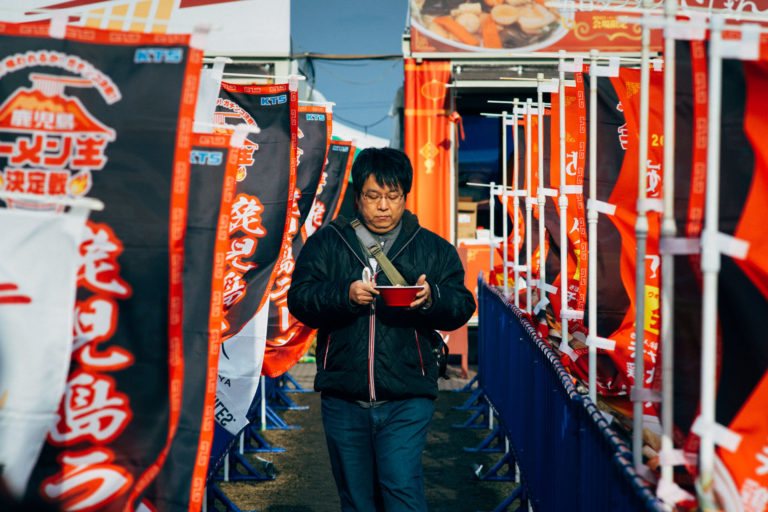 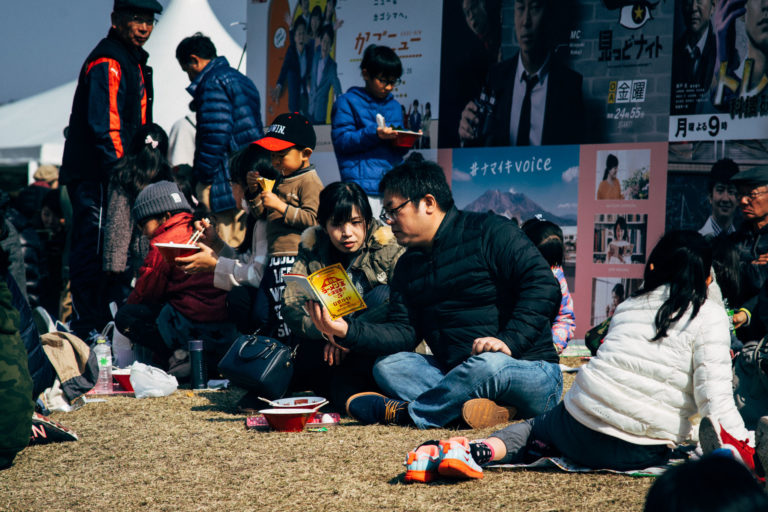 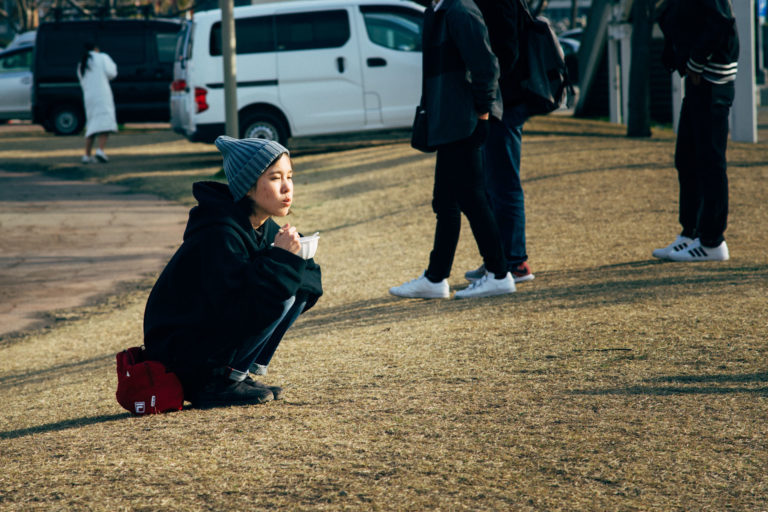 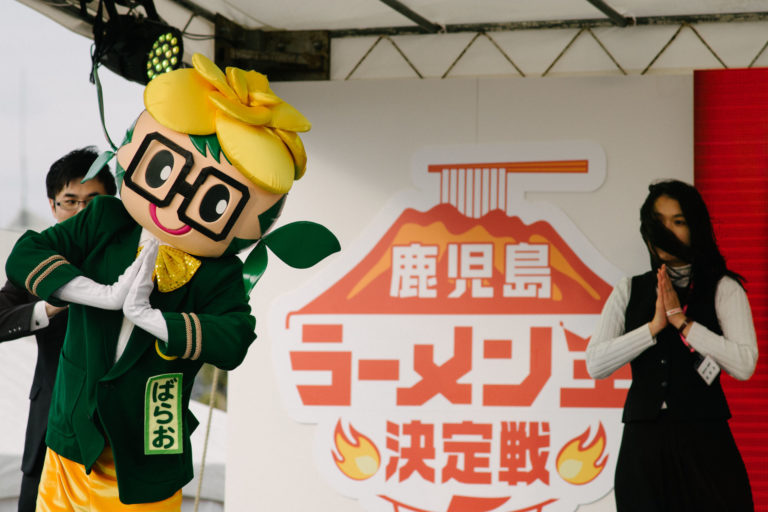 I hope this article has given you hunger, and the urge to taste this dish that is an integral part of Japanese culture. If you are planning a trip to Japan you can of course find it everywhere. If on the other hand you want to try the ramen from France, at the time I write this article you can especially find in the capital and some in Lyon, but it is not yet very popular. Elsewhere in Europe or the United States, it is much easier to experience it even though the price is generally quite distant from those found in Japan.

I would recommend the delicious Kodawari ramen located on Rue Mazarine in Paris… A very good address to try no less than four different recipes!